Sound clip 1: Same vowel in bag and back

In 2003, Bert Vaux and Scott Golder published the Harvard Dialect Survey, which included 122 questions surveying variation in pronunciation, vocabulary, and sentence structure. One question probed the vowel in bag. Out of 10,632 respondents, only 8.42% self-reported using [e:] instead of [æ]. On the maps, the switch to [e:] looks to be occurring between New York and Minnesota with higher concentrations along the Great Lakes. If you look at things state-by-state, the change is greatest in Wisconsin, where 48.5% of respondents self-reported using the same vowel as in bagel. Residents from Minnesota and North Dakota also reported similar numbers, but residents from Illinois and Michigan reported strikingly lower numbers (MN 39.24%, ND 44.74%, IL 7.29%, MI 13.79%). 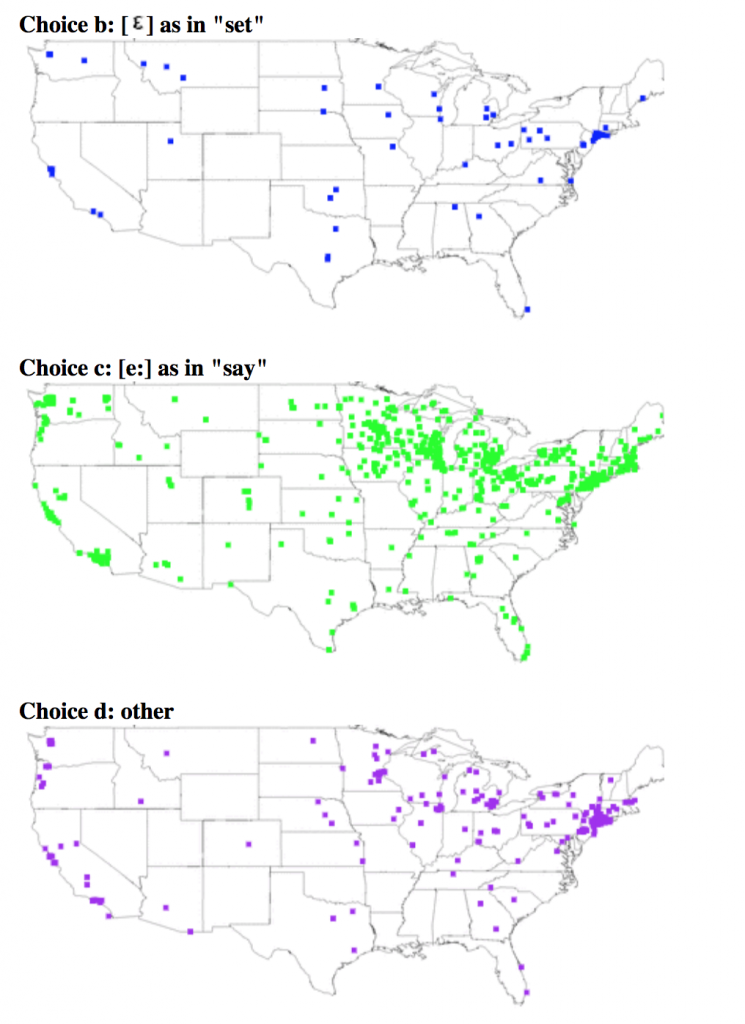 The Wisconsin survey results to all questions can be found here.

During the 2018-2019 school year, students in my introductory linguistics lecture at UW-Milwaukee collected data to map how Midwesterners vary in their pronunciation of the word bag. Specifically, we wanted to know where people use which pronunciation and whether age correlates with the difference. After analyzing more than 1,000 respondents’ data, we found that Wisconsinites vary in their pronunciation of bag across the state. No region within Wisconsin tended to have more speakers pronouncing bag with [e:] than other regions. In other words, the responses showed people using both pronunciations across the state with roughly the same frequency. We also did not find a difference in percentage between older and younger speakers, indicating that using the vowel in ‘bagel’ [e:] instead of the vowel in ‘back’ in the word ‘bag’ is stable.

Although the percentage of Wisconsinites pronouncing bag with [e:] instead of [æ] seems to be consistent across younger generations of English speakers, our data do not show how this vowel change is distributed across other aspects of Wisconsin English. When sounds change, the change they usually start in very specific contexts. In this case, the word bag has two pronunciations in Wisconsin, but the word back doesn’t. Eventually, people start using the vowel variation in words that rhyme. For example, if people pronounce bag with the [e:] vowel, they probably also use it in the words rag and tag. Over time, people also started using the [e:] vowel instead of the [æ] vowel in the words dragon and agriculture because the vowel is directly followed by a g-sound.

The vowel in bag is interesting for a number of reasons. First, it differs from another change in the region. A change known as the Northern Cities Vowel Shift has spread from upstate New York to southeast Wisconsin, involving vowels in words like stop, cottage, and Wisconsin.

In the Northern Cities, we would expect speakers to pronounce bag with a diphthong of either [beəg] or [bɪəg], but our data did not show this pronunciation.

Sound clip 4: bag with a diphthong

Next, the Atlas of North American English (2006) shows general raising of the [æ] vowel to [e], commonly referred to as ‘ash-raising’. With bag, the vowel is shifting away from the [æ] found in back (although the vowel in back may be produced higher in the mouth among speakers from Wisconsin than from elsewhere in North America). In other studies of the bag vowel, the ‘ng’-sound [ŋ] in words like hang or sang (both pronounced with the [e:] vowel) seems to trigger the change. The ng-sound [ŋ] is similar to the g-sound [g] and speakers seem to be taking the vowel sound from words that end with –ang and applying it to words and syllables that end with -ag. Thus, speakers who pronounce bag with [e:] are more likely to also use the same vowel in the words rag and dragon. In my own Seattle dialect, I use [e:] in all three of these words, but I use [æ] in agriculture and its shortened form ag.

My parents differ with one using [e:] and the other using [æ] in agriculture. When I’ve asked others across the Midwest about their pronunciation, it seems that most speakers consistently use the same vowel for dragon as they do for bag but not necessarily for agriculture. To understand how this vowel change is occurring across Wisconsin, we need more data on words with similar environments to bag from speakers of various ages. Such data might show how the change is spreading (if at all) across different regions and generations of speakers to create Wisconsin’s distinct English.

Language variation also has social importance. After writing the draft for this article, I had two interesting encounters with the word bag. The first came from my 6 year old child’s school assignment. The note to parents printed at the bottom of the worksheet reads: “Parents- Your child colored items whose names have the sound heard in the middle of pack.” I read “-1 bag” in red ink on the worksheet because my kindergartner did not color the picture of a bag. Like roughly half of the children in Wisconsin, my child uses different vowels in the words bag and pack, so it is no surprise that the bag wasn’t colored in. The next day, a student sent me a meme about the pronunciation of bag.

Although Wisconsinites have been pronouncing bag with two different vowel sounds for roughly 70 years, there are still negative attitudes of the newer [e:] pronunciation. Judging these patterns of “good” or “bad” is a social decision, not a linguistic one. Still, it seems that the vowel [e:] is here to stay in bag and other words like it. So the next time a Wisconsinite asks you whether you want paper or plastic, listen for the vowel and celebrate diversity.

Kelsie Pattillo is a lecturer in the Department of Linguistics at UW-Milwaukee, where she has the thrill of introducing 500 students to linguistics each year. Along with teaching in the lecture halls, Dr. Pattillo researches language change and linguistic typology. She also proudly pronounces the word bag with an [e:] vowel.

Acknowledgements: Special thanks to the UWM Golda Meir Libraries Digital Humanities Fellowship for funding this project, my teaching assistants Jieun Lee and Lauren Clark who helped me teach this project and collect data, and my students from Linguistics 210: Power of Words who collected data during the Fall 2018 and UWinteriM 2019 terms.