In the heart of Wisconsin’s Fox River Valley, where using “bubbler” instead of drinking or water fountain is the better-known speech marker, something bigger sets the speech of the area apart: the Dutch language. Dutch has been spoken here for more than 150 years, and some still speak it today. The area maintains a strong connection to its Dutch heritage, and while some of the area’s residents have held onto the language, that is changing.

The heart of this Dutch-speaking community is the Village of Little Chute, first settled by Dutch immigrants in 1848 when a Dutch Catholic priest, Father van den Broek, advertised the area in the Netherlands and helped settle families in Wisconsin. Dutch Catholic immigration to the area continued for several generations until at least 1960, and the area boasts a large population with Dutch ancestry.

In fall 2018, Josh Brown and I went to the Fox River Valley to find out what remains of the Dutch language there. We interviewed 30 people about language and culture, asking questions such as when they or their ancestors immigrated, in which situations they use Dutch, and their feelings about Dutch and English. While the area appears to be maintaining its Dutch cultural heritage, the same cannot be said of the language. Most Dutch speakers are elderly, and there are no efforts to maintain the language.

Some people do use Dutch words in their English for kin, such as oma and opa for grandma and grandpa or tante for aunt. Others use Dutch for food or recipes connected to Dutch tradition, such as stamppot, potassi, or wortelstoemp for a potato and vegetable mash, or brij for a fried meat and grain loaf.

We also found Dutch influence in the landscape, with the signs of many businesses and parks boasting Dutch last names, windmills, wooden shoes, or other aspects of “Dutch-ness”.  Little Chute has a fully functioning Dutch windmill downtown that operates as both a tourist attraction and community center, and nearby Hollandtown has celebrated an annual Dutch festival, the schut since 1849.

So while the community may continue to celebrate its Dutch roots, the language itself may be coming to an end. 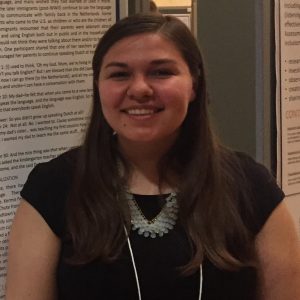 I am from Little Chute, Wisconsin, and double majored in Biology and Spanish and minored in Interdisciplinary Linguistics at UW – Eau Claire. I will be pursuing first an MA in Hispanic Linguistics and then a PhD in Spanish with Language Science at Penn State. I hope to someday be a professor of neuro- and psycholinguistics, studying how the brain produces and processes more than one language and inspiring the next generation to be interested in and excited about language. I coauthored a forthcoming article in the Selected Proceedings of the Ninth Workshop on Immigrant Languages in the Americas.