We still debate where exactly “Up north” starts in Wisconsin — everything north of highway 8 or north of highway 29? Wherever the line is, it has been transformed over the last century and a half – from an area of extraction lumbering to small scale yeoman farming to tourist destination. Lumbering transitioned into a “lumberjack” form around 1900 after the supply of pine was mostly exhausted and the region became a destination for many recent immigrants looking to farm. Finns quickly became one of the largest immigrant groups in northern Wisconsin as this coincided with the height of Finnish immigration to America. Some came directly from Finland, but many others moved to the area after first working in mines in Minnesota and Michigan’s Upper Peninsula (the UP).

Finns established communities across northern Wisconsin: in the northeast in Superior, Maple, Brule, Waino, Oulu, Herbster, Marengo, and Washburn; closer to the border with the UP in Iron Belt, Saxon, Hurley, Van Buskirk, and Oma; and farther south in Merrill, Rhinelander, and Brantwood. Finnish was spoken in families and between neighbors in these communities and they maintained close ties with Finns in other townships, both nearby and in neighboring Minnesota and the UP.

They kept speaking Finnish well into the mid 1900s, longer than some other immigrant groups, and there are still speakers today. This is in part thanks to the social networks Finns maintained across the Upper Midwest and North America via Finnish language newspapers, cooperative store networks, Finn Halls, and Lutheran churches. One hub for these networks was in Superior, home to the Central Cooperative Exchange from 1917–1963 and a few Finnish language papers including Työväen Osuustoimintalehti [The Workers’ Cooperative Paper] from 1930–1965, as well as the Työmies [Workingman] newspaper from 1914–1950.

By the 1950s, a set of factors made it more difficult for communities to maintain Finnish. Legislators passed new zoning laws in the 1930s to reintroduce forestry and in turn discourage farming in the Northwoods, leading many to move to cities for work. This economic shift, combined with easier travel by car, meant that people increasingly went to larger cities, forcing local businesses to close. This new legislation coincided with changes across important Finnish-American institutions. For example, Finnish immigrants were huge champions of the cooperative movement and co-op stores had long played an important role in these communities by offering a place to buy goods at controlled prices, as well as a place to catch up with neighbors – often in Finnish. By the 1950s, the Cooperative Central Warehouse (formerly the CCE) was struggling to continue whilst the area was shifting away from agriculture. Despite this, co-ops were often the last businesses to close in rural communities because of their important role not just as part of the local economy, but in the social life of a community as well.

Oulu, WI illustrates this timeline of settlement and language shift. Oulu became a township in 1904 and was settled predominantly by Finnish immigrants. The population reached its height in the 1920s at over 1,000 residents and today hovers around 500. Oulu was typical of other Finnish-American communities in that it was home to an Evangelical Lutheran Church with Finnish language services through the 1950s, a Co-op, and a Finn hall in the neighboring town. Finnish was spoken regularly at the Co-op and other local stores and the community had more farms than any other community in Bayfield County until the 1960s. As these changes gained momentum, many farms in Oulu were abandoned as the immigrant generation passed away and young adults left the community to find work. The Oulu branch of the Co-op closed in 1984 and the community’s last store closed in 1991.

Today, a handful of people still speak Finnish. I first drove up to Oulu in the spring of 2016 with Joe Salmons and Samantha Litty to interview some of these speakers. Even among those who don’t speak Finnish, the language and culture have left an impact on local English. Most pronounce the word sauna as “sow-na” rather than “saw-na” and use the Finnish words for particular ethnic foods such as mojakka for a Finnish-American beef stew, pulla for cardamom coffee bread, and riisipuuro for rice pudding.

Despite shift to English, Oulu keeps strong pride in its Finnish heritage. The Oulu Cultural and Heritage Center opened in the summer of 2014 to preserve and showcase Oulu history. It has been built up by dedicated volunteers and continues to grow into an open air museum reminiscent of Old World Wisconsin. Buildings have been relocated to the site and restored and the Center now serves as a gathering place, offering a weekly coffee and conversation hour and a summer school program with one week focused on local history. While there aren’t explicit efforts to revitalize the Finnish language in Oulu, it is considered an important part of the town’s history and Finnish lessons have been offered during the Center’s summer school. Finnish can still be heard at the weekly conversation hour and Finnish songs are sung at the community’s annual Juhannus Juhlat Midsummer Fest. Finnish is no longer the usual means of communication throughout the community, but it still serves an important role, along with the Finnish flags scattered throughout the property and t-shirts and plaques reading sisu, as a marker of identity and pride in the community’s heritage. 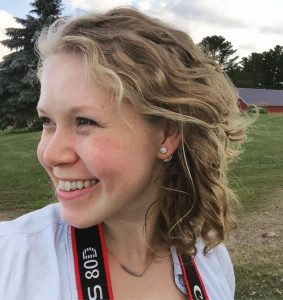 I am a PhD student in Scandinavian Studies and minoring in Linguistics at UW – Madison. My research focuses on how language and culture interact and change over time in Finnish-American immigrant communities. I myself was born and raised in Alexandria, Virginia as a heritage speaker of Finnish and have always been interested in the role of heritage languages in cultural maintenance and identity formation. I hope to continue working with communities and to support efforts to promote cultural identities through language. For my Master’s thesis, I created a short film about the work being done at the Oulu Cultural and Heritage Center and have published an article on language and societal shift in Oulu, WI.